CLOSE President Trump and President George W. Bush won the electoral vote during the election, but not the popular vote. How does the electoral college work? USA TODAY The National Popular Vote would finally eliminate the false premise that the construction of our Electoral College was meant to protect small […]

The National Popular Vote would finally eliminate the false premise that the construction of our Electoral College was meant to protect small states.

We’re going to get rid of the Electoral College, but it won’t be by way of Congress.

The states will do it, eventually.

Elections like the one we’re involved in, and several others in the recent past, will cause us to come to our senses and do away with an outdated, unfair, undemocratic political dinosaur.

Nevada lawmakers last year passed a bill meant to guarantee that all of the votes cast by its citizens in a presidential election actually … count.

This doesn’t happen in Arizona.

Or plenty of other states.

But there is a movement on to make it happen nationwide, and Nevada was the 15th state to join it. The Nevada bill would have agreed to give all of the state’s electoral votes to the candidate who wins the nationwide popular vote. Unfortunately, it was vetoed by Gov. Steve Sisolak.

That will change in time. Common sense will win out.

If enough states pass such legislation (and the momentum is building in that direction) the anti-democratic vestige of slavery known as the Electoral College would go the way of other political shams.

An organization called National Popular Vote is out to eliminate the Electoral College without tampering with the Constitution. 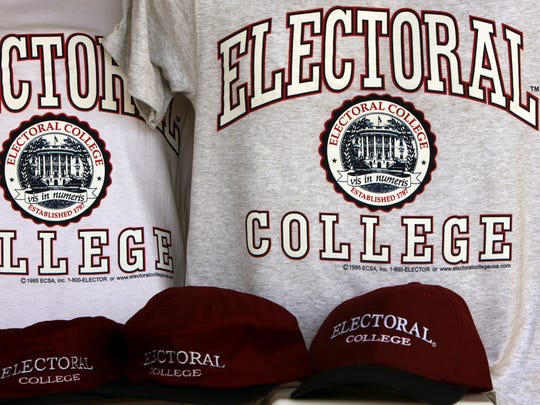 Fourteen states and the District of Columbia have committed to the cause.

When enough states join the effort to reach 270 electoral votes, the passed bills from all the states will kick in and guarantee that the candidate with the highest vote total nationwide would become the president.

As it should be.

President Donald Trump used to believe this, once tweeting in 2012: “The electoral college is a disaster for democracy.”

The electoral college is a disaster for a democracy.

He changed his mind after that “disaster” got him elected.

Why was the Electoral College created?

The construction of the Electoral College wasn’t exactly about moral certainty or about protecting small states (I hear that all the time) or anything like that. It was a simple power play by slave states.

Presidential electors are granted based on population. Slave states wanted their slaves counted in their population numbers (even though they weren’t citizens and could not vote) in order to give themselves more votes in the Electoral College. The “compromise” that was reached, grotesque as it now seems, was that each slave counted for three-fifths of a person.

It was the idea of James Madison, a slave owner, and the representatives of Southern states.

Those states had the most people — but only if slaves were counted. As Paul Finkelman, visiting law professor at University of Saskatchewan in Canada, pointed out, “None of this is about slaves voting. The debates are in part about political power and also the fundamental immorality of counting slaves for the purpose of giving political power to the master class.”

A co-founder of National Popular Vote is John Koza, described by The New York Times as someone who helped invent scratch lottery tickets.

The National Popular Vote would finally eliminate the false premise that the Electoral College was meant to protect small states. In fact, our system reduces a presidential election to a few battleground states and voids millions of votes.

Koza said, “Everybody’s vote should count. But entire campaigns run around a couple of states and that, in turn, distorts government policy.”

A few years back, the Arizona House, by a 40-16 margin that crossed political lines, passed a bill to join the effort.

Then-Senate President Andy Biggs would not let the bill come to a vote in the Senate, however.

J.D. Mesnard, who introduced the bill, said in 2016, “Our presidential elections have come down to 10 battleground states. Arizona is so decidedly Republican that neither Democrats nor Republicans find it necessary or beneficial to campaign here. Arizona’s issues are ignored because Arizona voters don’t matter.”

His view may have changed since Trump was elected in 2016 by winning in the Electoral College while getting trounced by nearly three million votes.

This isn’t about Trump, however. Or any other candidate. It isn’t about Republicans or Democrats.

It’s about divesting ourselves of a process for electing the leader of the free world by way of a system designed to count slaves as three-fifths human.

EJ Montini is a news columnist at the Arizona Republic, where this column originally appeared. Follow him on Twitter: @ejmontini

Sat Nov 28 , 2020
© Provided by The Independent Mick Schumacher has said he is using tips given to him by his father as he pursues a career in Formula One. Seven-time F1 champion Michael Schumacher has not been seen in public since a skiing accident in 2013 left the German with severe brain […]