The CEO of Wells Fargo recently wrote a company memo to employees blaming the lack of diversity in their ranks on “a very limited pool of Black talent to recruit from.” While he subsequently cited unconscious bias, clarified his remarks and apologized, his comment serves as a teachable moment for […]

The CEO of Wells Fargo recently wrote a company memo to employees blaming the lack of diversity in their ranks on “a very limited pool of Black talent to recruit from.” While he subsequently cited unconscious bias, clarified his remarks and apologized, his comment serves as a teachable moment for all those interested in creating lasting, positive change in this moment of racial reckoning.

© Andre Chung for The Washington Post/Getty Images
Dr. Wayne Frederick is President of Howard University. Moving forward the university is investing in and putting additional emphasis on its research capacity. He’s pictured in the brand new Interdisciplinary Research Building on Georgia Avenue. Founded in 1867, Howard University is one of the elite HBCU’s in the country, but revenue and administration problems plague the instititution and threaten its status. (Photo by Andre Chung for The Washington Post via Getty Images)


Wells Fargo’s CEO verbalized what is often whispered in many corporate hallways. But let me be clear: There is no shortage of Black talent in the United States.

As president of Howard University, I have a unique window into the African-American students within my own institution, fellow historically Black colleges and universities (HBCUs) and other centers of higher education across the country. The talent I see every day is immense and inspiring. Black students and alumni have a depth of capabilities and diverse passions and ambitions. They leave our campuses eager to work hard and ready to change our industries, our society and our world for the better. All they need is an opportunity.

Our nation’s ongoing struggle with the question of race is intimately tied to the origins of the institutions of higher learning organized to educate Black Americans. Beginning with the Institute for Colored Youth (now Cheyney University) in 1837, more than 100 diverse institutions of higher education now exist under the federal designation of “historically Black colleges and universities.”

In 1867, Congress chartered the institution I now lead, Howard University, in what I often call one of America’s great romances. The aftermath of a bloody civil war gave way to a congressional investment in providing education for newly emancipated people when President Andrew Johnson, an openly racist president — and the first to be impeached — signed our charter. The Morrill Acts passed by Congress facilitated the creation of Black land grant colleges.

Over the past 150 years, America’s HBCUs have consistently built a Black professional class despite the peaks and valleys of race relations over time. Despite chronic under-resourcing and commonly serving students who are not born into privilege, these institutions have contributed mightily to the fabric of our nation. Furthering our investments in HBCUs will serve to advance the economic opportunities of graduates from these institutions and for the Black community more generally.

Yet it is little surprise that this American success story of resilience and achievement is still unknown or underappreciated to many even at the highest ranks of American industry. Despite the successes of HBCU alumni, many current students from these institutions still have difficulty finding opportunities befitting their level of qualifications. Unconscious and institutionalized biases across industries make it difficult for Black candidates to get their foot in the door. In addition, many of our nation’s biggest employers lack pipelines that can connect them to Black talent.

In Silicon Valley we confronted the myth that there is a “limited pool of Black talent” in a partnership with Google and “Tech Exchange,” formerly known as Howard West, was born. Highly qualified HBCU and Hispanic Serving Institution (HSI) students travel to Google HQ and are trained in the hard and soft skills needed for success by Google engineers — many of whom report they have never previously worked with anyone from an HBCU in their entire career.

Now in its fourth year, the program has already converted many students to full-time employees at Google and other major tech firms. Last year, Howard created a similar program with Amazon Studios to further demonstrate that we can diversify the C-suites of the entertainment industry by giving our students a real and robust exposure to Hollywood.

Fishermen know that if you want to catch fish, a good rule of thumb is to look in rivers, lakes and ponds. Qualified Black talent exists across the broad spectrum of our nation’s HBCUs all with varied strengths in everything from accounting to zoology. Corporate America, take a second — or first — look at our nation’s HBCUs, where our talent pools are bountiful, and I assure that you will find a surplus of Black talent to recruit from.

Sat Oct 31 , 2020
WINSTON-SALEM, N.C. (AP) — NBA star Chris Paul led nearly 2,500 people on a march to an early-voting site at a historically Black college in North Carolina where he also takes classes. Paul was part of the “March to the Polls Part 2” event held Tuesday at Winston-Salem State University, Winston-Salem […] 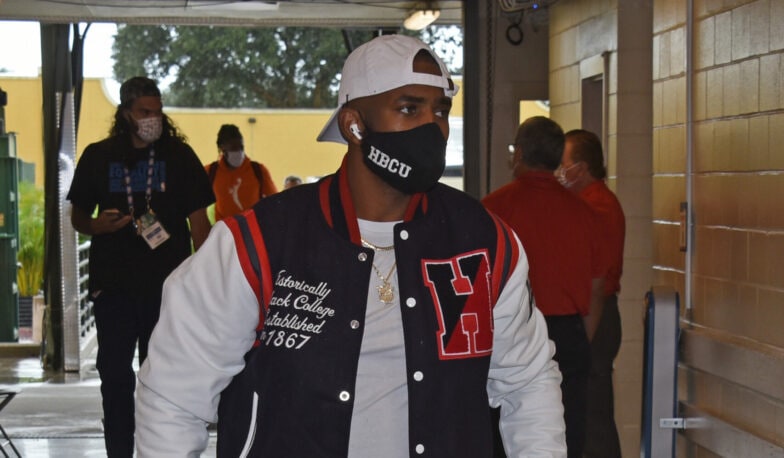