A meeting at the University of Sydney descended into “chaos” on Tuesday night after one student made an unprecedented personal donation of $50,000 to the student council, after being criticised for not doing enough in her elected job. Arts/law student Abbey Shi made the surprising announcement after she had been […]

A meeting at the University of Sydney descended into “chaos” on Tuesday night after one student made an unprecedented personal donation of $50,000 to the student council, after being criticised for not doing enough in her elected job.

Arts/law student Abbey Shi made the surprising announcement after she had been censured for not doing any work for three months in her student-funded position.

Shi had been ordered to pay back $3,000 of her yearly pay, but stunned her fellow student councillors, who were meeting on Zoom, by appearing just before the meeting closed and pledging to pay the money back with an additional $47,000 donation.

The current student council president, Liam Donohoe, had to clarify to confused colleagues that it was “five with four zeroes”, and student newspaper Honi Soit described the scene as “absolute chaos”.

Shi told Honi Soit she had made the money from the “stock surge” over the past year, and wanted to apologise for her absence from the student organisation.

Last year, Shi was elected as one of the student representative council’s two general secretaries – a role that receives a $12,000 yearly stipend.

The Sydney University SRC is independent of the university and funded by the student services amenities fee, which is paid by students.

The student council had been dominated by Labor factions for nearly 15 years from 2000, but in recent years international students, Greens-affiliated students and leftwing independent students have variously been in power.

At the start of Tuesday night’s meeting, the SRC’s co-general secretary, Liam Thomas, said Shi had not performed any of her duties or responded to messages or emails over the past three months – including a month when Thomas was in hospital.

The council voted at 7.30pm to censure Shi (who was not present) but at 9.15pm she surprised the council by logging onto the Zoom call and announcing her $50,000 donation.

“People vaguely heard, but they weren’t sure if it was fifteen thousand or fifty thousand,” Donohoe told Guardian Australia.

Shi’s motion was accepted by the council, with 16 voting for and two voting against.

A censure motion in the student council has no practical effect and is not officially mentioned in the SRC’s regulations. Shi’s term as general secretary was due to expire at the end of the year.

Shi told the student newspaper the $50,000 came from “the stock surge and CFD trades in times of the rebound of the Nasdaq, ASX and other Asian stock markets”.

“This donation is in ode to the SRC councillors, office bearers, staff and Honi editors who are [and will be continuing to] fight the battle of the SRC’s funding cuts and university fee hikes,” she said.

Thomas told Honi Soit that Shi’s donation was genuine and “not a political stunt”.

Donohoe told Guardian Australia: “To be honest that money can go a long way, as we are run on a shoestring budget.”

However, Dr Derwent Coshott, an expert on trusts and donations law at the University of Sydney, said the SRC was not an incorporated association and this could cause issues with the impromptu donation.

He said Shi had to be careful with the wording of her donation, otherwise she could inadvertently make every individual member of the student council a trustee of the $50,000.

“It turns on the language used,” he said. “Is she simply making a donation in their general funds … or is she is effectively, without realising it, establishing a charitable trust in respect to these funds. It’s not the same thing.”

Donohoe said the donation “clearly poses both legal and ethical questions” and would be considered carefully.

“We haven’t in any way committed to taking the money, we just recognised that she apologised,” he said. “We also have not undone the censure. It was in no way a conditional offering.

“We will need to think about it. It will probably be something for the next executive.”

He added that censure motions were rare in the student council. “We might do it more often now, as a revenue raiser,” he said.

Tue Dec 8 , 2020
The wild moments came fast and furious in Week 11 before we even got to Saturday. There was a game-winning, fake-spike touchdown for Western Michigan on Wednesday. There was late-game pettiness and controversy from Iowa and Cincinnati on Friday. Then came Saturday, when we saw QB heroics from Florida’s Kyle […] 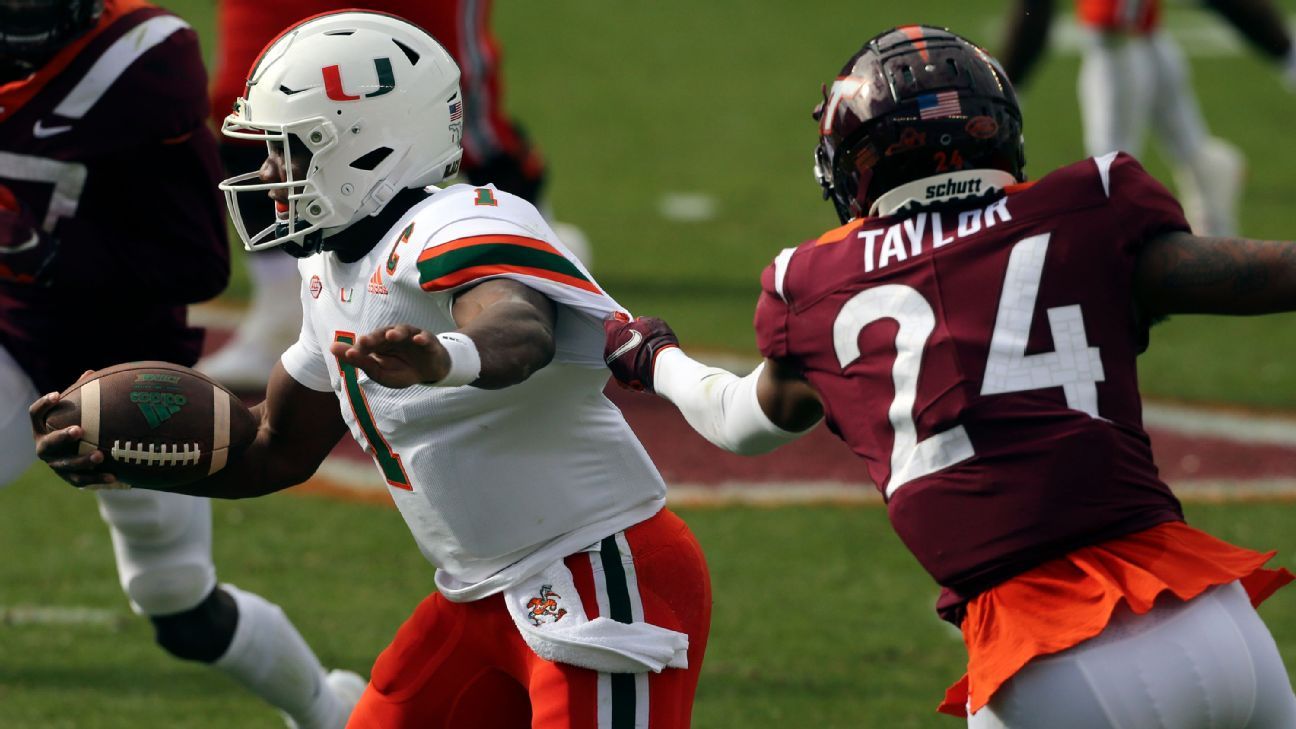