The League of Extraordinary Gentlemen was a disaster. Less an adaptation of the Alan Moore and Kevin O’Neill graphic novels of the same name than a slapped-together cash-in on the action-horror craze of films like The Mummy, the 2003 film was reviled by critics and opened second to Pirates of the Caribbean. It also happens to serve as the final on-screen role for Sir Sean Connery, who passed today at the age of 90.

Stories abound about how much Connery clashed with the film’s director, Blade‘s Stephen Norrington, while filming, and how those experiences allegedly led him to retire from acting in 2006. (Yes, Sir Billi fans, I know that’s technically his final role, but two hours in a voice booth as a skateboarding CG veterinarian isn’t quite the same as starring in a summer blockbuster).

But he’d already been on his way out for some time; he’d allegedly turned down the role of Gandalf in The Lord of the Rings just a few years prior, remarking that he didn’t understand the script. “I’m fed up with the idiots,” Connery said in a 2005 interview, citing his experiences with Norrington (whom he called a “lunatic”) and the increasingly producer-driven model of mainstream filmmaking as reasons he quit acting.

For many Connery fans, he’ll always be James Bond, and a lot of his later career was informed by that legendary status. In the ’60s, he defined the suave, alpha-male swagger of the age, smoldering his way through five (official) James Bond films with his disarming smile, boxer’s physicality and irrepressible sexual appetites. After floundering a bit in the ’70s to find an identity post-Bond, he flourished in the ’80s and early ’90s with roles in Brian De Palma’s The Untouchables (which won him a Best Supporting Actor Oscar) and Indy’s dad in Indiana Jones and the Last Crusade.

But the specter (SPECTRE?) of Bond would linger even in the later years of his career. The Rock‘s John Mason, with his espionage background and effortless quips, might as well be 007 after facing some hard years in the clink. His villainous August DeWynter in 1998’s execrable film adaptation of The Avengers is, at the very least, a cheeky bit of meta-casting opposite ’60s Britain’s TV answer to his cinematic super-spy.

Then we come to The League of Extraordinary Gentlemen (or, as the marketing nauseatingly branded it, LXG), a big, steampunky mess of a movie that hardly deserves consideration outside of its nostalgic kitsch appeal. In a post-Connery world, though, it offers new value as a capper to the man’s legacy as England’s quintessential action hero, ruminating on the legacy he’s leaving behind along the way.

All of this is done through the lens of Allan Quatermain, another iconic British boyhood hero — the protagonist of H. Rider Haggard’s adventure stories in the 1880s, most notably King Solomon’s Mines. When we first meet him, he’s washed up, hiding in an English ex-pat pub in Africa. He’s so exhausted by the shadow of his swashbuckling legacy that he hires doubles to pretend to be Quatermain just so he doesn’t have to meet his fans.

His Quatermain (strangely spelled and pronounced “Quartermain” in the film) put in years of service to Queen and Country, only to leave behind a life of loneliness, loss, and spurned lovers. They’re plot points that wouldn’t be too out of sorts in a late Craig-era Bond, but here we get to see the original 007 wrestle with them firsthand, albeit in a less-than-ideal story.

Unlike Bond, though, here he’s got to become a reluctant leader to a pre-Avengers assemblage of horror-based superheroes: an off-brand Invisible Man (Tony Curran), a fully-vampiric Mina Harker (Peta Wilson), a karate-kicking Captain Nemo (Naseeruddin Shah), among others. Their Nick Fury? Why, “M” (Richard Roxburgh), of course.

The winks at the audience become shouts. Connery’s truly back in the saddle again.

This time, he’s older, crankier, a bit more feeble; he’s not the world-saver he used to be. To his credit, Norrington stages the action scenes with enough flurry and flourish to make it look like Connery’s scrapping it up with the rest of the young’uns, and the star still knows how to carry himself in a fight. But years of wear, tear, and regret have whittled him down to an old man just waiting for his time to pass. He commands the team, but out of a sense of reluctance, the notion that the world might just stop spinning if he were to die.

This bridge between the old and the new is best encapsulated in Quatermain’s budding mentorship of Special Agent Tom Sawyer (a rakish Shane West), a public-domain American character grafted onto the comic’s original lineup to presumably lend some sex appeal amid all the character actors that fill out the rest of the cast. Where Quatermain is a patient, old-school marksman, Sawyer is the yee-haw cowboy, running down city streets firing revolvers akimbo like he’s in a John Woo remake of a John Ford movie. (“If you can’t do it with one bullet, don’t do it at all!” Quatermain shouts at him.)

But in the lulls between action scenes, he and Sawyer bond on the deck of the Nautilus, using sniping lessons as a means to teach this new generation the value of patience and control. Even gnashing his teeth through the pat writing, these are solid scenes: Connery reminds us why his particular brand of fatherlike patience carried him through the later years of his film career.

It’s a quaint, obvious dynamic — Sawyer is the surrogate son replacing the one Quatermain lost years prior. No one could confuse it for compelling drama, especially since the bratty West isn’t half the performer Connery is. But it serves as a nifty reflection on the transition from the suave masculinity of Connery’s generation of stars to the more beautiful, youthful exuberance of the action stars who would follow him. Sir Sean was a looker in his prime, to be sure, but West’s airbrushed, androgynous perfection hammers home Connery’s growing obsolescence in a world that no longer needs him.

And so it goes, Quatermain is fatally stabbed by M (how fitting that Bond’s old boss would kill off Connery’s final character), leaving it to Sawyer to save the day by paying off the patience Quatermain taught him. And in his final words as a live-action actor, Connery tells the young West: “May this new century be yours, son, as the old one was mine.” (Granted, we get an obnoxious, deeply colonialist teaser involving a voodoo priest making him rise from an African grave in the closing seconds, but that’s a note best ignored for sanity’s sake.)

Just as Quatermain resigns himself to not having a place in the mechanized future of the 20th century, so too did Connery recognize that his particular brand of brute-force persona didn’t mesh with the studio-neutered blockbusters of the 21st-century.

I’ll freely admit to a perverse affection for The League of Extraordinary Gentlemen, warts and all. It sands down the comic’s darker, more complicated edges into a formulaic summer movie for the kiddies, but by gum, there’s a lot of camp, bisexual energy (c/o Mina and Stuart Townsend’s dandyish immortal Dorian Grey) to help compensate for it. Ruminating on the film’s significance to Connery’s career is kinda like looking at Gene Hackman’s filmography through the lens of Welcome to Mooseport.

Even so, in glancing back on Connery’s last role in a world where he’s truly gone, his Allan Quatermain takes on new, melancholic significance. In the old hunter’s obsolescence, we now see Connery the actor, Connery the movie star, Connery the figure of old-school masculinity for both good and ill (let’s not forget the time he said women “Jusht need a little shlap” ). Instead of trying and failing to adapt to the times, Connery recognized when his moment was over and bowed out before it became any more embarrassing.

Certainly, one can’t claim The League of Extraordinary Gentlemen as a particularly high note on which to end Sean Connery’s illustrious career. But it is a curiously thematic one, an exploration of an older generation of action star realizing he doesn’t want to keep up with the shambolic, fantastical demands of 21st-century filmmaking. For better or worse, he’d hand the reins to the Tom Sawyers of the movie business, and let the new age move on without him. And as we look back on the man’s incredible body of work in the wake of his death, it’s worth recognizing that level of self-awareness.

Subscribe to Consequence of Sound’s email digest and get the latest breaking news in music, film, and television, tour updates, access to exclusive giveaways, and more straight to your inbox.

At least Aaron Yetter surveyed “the whole gamut of ducks,” including good numbers of mallards, on the aerial surveys during a week where the drought conditions and the unusual, even record, warmth, showed its impact on waterfowl and waterfowlers. 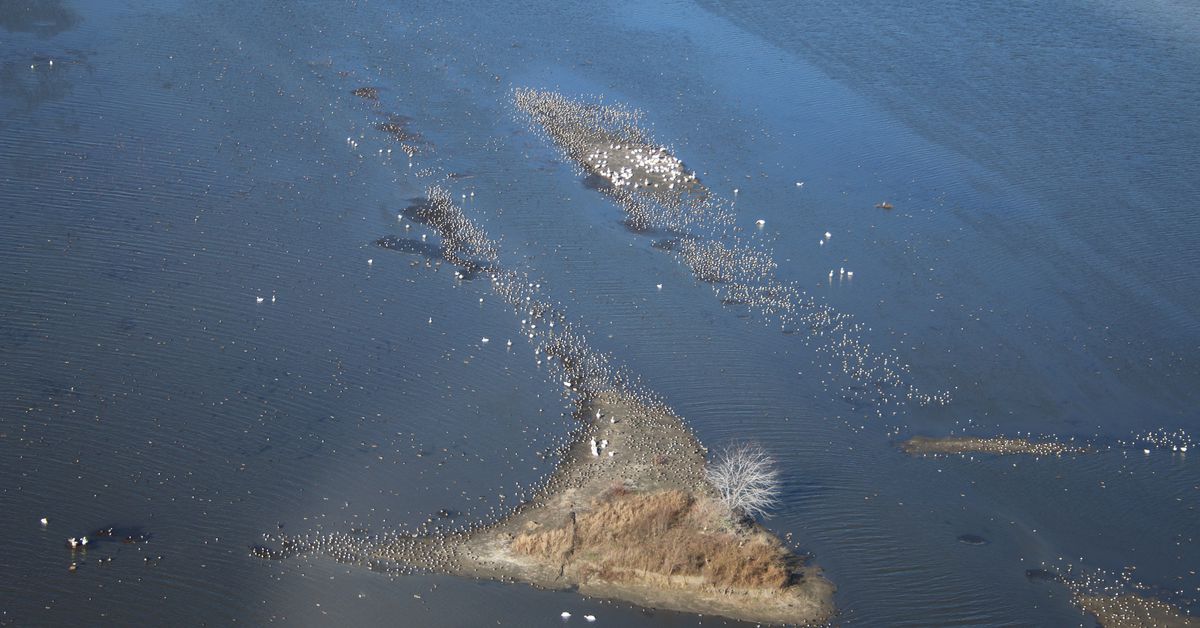