RICARDO ARDUENGO/AFP via Getty ImagesBy CRISTINA CORUJO, ABC News (NEW YORK) — After the National Scientific Foundation (NSF) announced last Thursday the demolition and decommission of the iconic Arecibo radio telescope in Puerto Rico, scientists, experts and many Puerto Ricans have taken to digital platforms to plead with the government […] 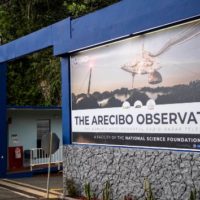 (NEW YORK) — After the National Scientific Foundation (NSF) announced last Thursday the demolition and decommission of the iconic Arecibo radio telescope in Puerto Rico, scientists, experts and many Puerto Ricans have taken to digital platforms to plead with the government to save the 57-year-old observatory.

Many including researchers and students are using #SaveTheAreciboObservatory and #WhatAreciboMeansToMe hashtags to share the observatory’s impact in their lives and the scientific world. A Twitter account called Save the Arecibo Observatory has also been created.

“#WhatAreciboMeansToMe: More than a telescope,” Kevin Ortiz, a physics student at the University of Puerto Rico, wrote on Twitter. For him, the observatory has had “an incalculable impact in the communities of PR.”

Organizations including the Planetary Society are also joining the conversation on social media.

“Arecibo Observatory touched the lives of so many people. Its scientific achievements enriched our understanding of the universe and helped protect our planet from asteroids,” the organization said in a tweet.

For Ortiz the radio-telescope is not only a Puerto Rican landmark, but it’s also a symbol of inspiration.

“I had visited the observatory as a kid many times and it is responsible for sparking my interest in astronomy,” Ortiz told ABC News.

The 22-year-old undergrad student is in his last year of college and has been working as an astronomy researcher in the Planetary Habitability Laboratory for more than two years. The Planet HabLab is a research and educational virtual lab from the University of Puerto Rico in Arecibo that uses the radio-telescope to study the habitable universe.

“They learn to use the observatory,” Méndez added.

“I can go around with people showing the observatory and he would be in the control room doing observations,” Méndez spoke about Ortiz’s work.

The groundbreaking radio-telescope has been key in tracking asteroids. Among the many accomplishments of the observatory is the discovery of the first extrasolar planets in 1992 and was the first to see a planet orbiting a sun-like star in 1995.

The observatory’s impact has led many to join a petition submitted to the White House to keep the radio telescope in operation.

“We urge emergency action to have the Army Corps of Engineers or another agency evaluate the telescope structure and search for a safe way to stabilize it, to provide time for other actions to be considered and carried out,” reads the petition, which has been signed by over 20,000 people.

Despite structural damages reported at the telescope, Méndez and Ortiz say there might be a way to save the telescope.

Two cables holding up the 900-ton platform hanging at 450 feet above the ground broke, tearing the 1,000-foot reflector dish.

“We are not complaining about the engineering evaluation, we know that there are risks,” said Méndez.

Jenniffer Gonzalez, Puerto Rico’s resident commissioner, wrote a letter to Congress asking for action to save the observatory.

“We respectfully request that you allocate the funds necessary to enable NSF to continue exploring options to safely stabilize the structure and maintain the telescope and surrounding areas,” González’s letter said. “We understand that funds could be used to stabilize and immediately work on the repairs.”

Repairs for the auxiliary cables damaged in August were already underway, according to González’s letter.

“Our question was not if the observatory should be repaired but how. But in the end, a preponderance of data showed that we simply could not do this safely. And that is a line we cannot cross,” NSF said in a news release from last week. “Even in the event of repairs going forward, engineers found that the structure would likely present long-term stability issues.”

Despite NSF’s position, some scientists, including Méndez, believe that with a true commitment from several organizations, including the NSF, the telescope could be saved, restored or even rebuilt.

The radio-telescope is under a cooperative agreement between the University of Central Florida, which operates and manages the facility, Yang Enterprises, Inc., Ana G. Méndez University and the federal entity, NSF.

For many experts the hard news of the official shutdown of the telescope came as sad news, but not as a surprising announcement.

Méndez says that in the past, the NSF has “reduced funding from Arecibo and other observatories.” According to Méndez and Ortiz, the foundation started to fund more facilities with newer technology, leaving the observatory behind.

NSF told ABC News in a statement that it “has not decreased funding for the observatory. To the contrary, on top of Arecibo Observatory’s operational budget, NSF provided millions of dollars for new equipment and technology, representing an investment in the observatory’s future.”

“The decision to plan for decommissioning is necessary for safety reasons, and also provides NSF with the chance to preserve as much infrastructure as possible for the future of science at the observatory,” the statement continued.

Three years ago, the foundation did produce a plan to reduce funding to Arecibo if new contributors would make the offsetting investments, but the plan didn’t emerge, according to the NSF.

Some programs at the Arecibo Observatory that involve the analysis and cataloging of archived data will keep receiving the support of the NSF, the federal entity said.

Regardless of the multiple roadblocks, the scientific community, students and Puerto Ricans say they will keep pushing until something is done to preserve the observatory.

“Arecibo is a facility that is absolutely worth saving,” Ortiz said. “It’s a critical instrument for planetary protection and planetary defense … for keeping track of near Earth asteroids.”

Wed Dec 2 , 2020
UNESCO estimates that over 1.5 billion students in 165 countries are out of school due to COVID-19. The pandemic has forced the global academic community to explore new ways of teaching and learning, including distance and online education. This has proven challenging for both students and educators, who have to […]